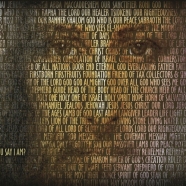 Posted by laurieetta on September 11, 2015 in Being Human | Leave a comment

In Mark 8:27-29, we come across Jesus asking his friends what the talk on the street is about his identity. In a sense, “What are people saying about me around the water cooler?” His friends offer up answers that all make sense given the time and culture of the question: John the Baptist; Elijah; a prophet. But it is interesting to note that Jesus doesn’t really seem too interested in what others are saying about him. Why bother asking? He doesn’t seem to agree or disagree with their speculations, but instead just asks another question:

Have you ever been in class and the teacher asks a question and you hesitate because you really don’t want to get the answer wrong? I wonder if that’s how the disciples felt. I wonder if they paused, sensing the weight of the question, maybe kicking the dirt or avoiding eye contact with Jesus.

Peter, the outspoken spontaneous one, chimes in, “You are the Messiah.” Yeah, he’s THAT kid in the class, always trying to impress. And he does. Jesus doesn’t ignore his response but instead praises it.

What I like—but also find challenging—about this little exchange is that Jesus could care less what the crowds say, but he is very interested in what we each say personally. In the world, there are all kinds of responses to who Jesus was and what he did and if it meant anything. But what everyone else thinks doesn’t matter. What you think does.

I’m in the process of interviewing 10th graders as they prepare for their confirmation. One thing I point out to the kids is that they will have to figure out the answer to that question for themselves—to make their faith their own. It doesn’t matter what their friends, their parents, their siblings, or anyone else has to say about who Jesus is. Each of them needs to answer the question for themselves.

Being Human connection: It’s probably one of the most important questions any of us will ever answer and we may spend out whole lives trying to figure it out. But it’s important enough to spend a whole life doing so. Or we may spend our whole ignoring it. Either way, we’ll have to answer it someday. Who do you say that Jesus is?

← Being Anxious Being Perfect (Not!) →