Home » Being Human » What are you worth? 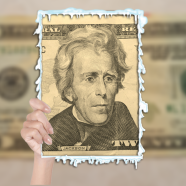 What are you worth?

I imagine many people would raise their hands.

I imagine each time, many people would still raise their hands.

I then say: “But why would you want this torn, crumpled, dirty piece of paper?

The answer: “Because it still is valuable.”

But WHY is it valuable? Is the paper of this bill worth twenty dollars? Is the ink on this bill worth that much money? No. Then why is this piece of paper worth $20? Because the government of the United States (which created it) says it’s worth $20. And that is the ONLY reason this bill has any kind of value.

The same goes for each of us. No matter how much you’ve been torn up, crumpled or stomped on, you still have value, because the Person who created you is the one who determines your value. The world is the big counterfeiter, who tries to tell you many other things determine your worth. Don’t be fooled. Only God does that and he has gone to great lengths to show you how much you’re worth. You mean the world to him. He decided he couldn’t live without you, so he sent Jesus our way.

Being Human connection: Ephesians 2 says we are God’s masterpieces. A masterpiece is very valuable… and so are you! Believe it.

← Words are Not Spaghetti “Life is difficult” →