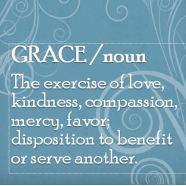 Posted by laurieetta on March 9, 2018 in Being Human | Leave a comment

In London in the 19th century, there were two pastors whose parishes were near each other. One of them ran an orphanage. The other one commented on how poor the condition of the children admitted to the orphanage was, but the word that got out was that he had commented on how poor the condition of the orphanage itself was. Well, the pastor at the orphanage considered this a slap on the cheek, so he blasted the other pastor in the next Sunday’s sermon. The paper picked up on this and ran the story and all the people went to the other pastor’s church to see what kind of rebuttal he was going to give.

Instead of defending himself in his sermon, he didn’t give a sermon at all. He only took an offering—for the orphanage the other pastor ran. The offering plates had to be emptied three times because of the overwhelming response.

Being Human connection: Where will you find opportunities to practice grace this week?

← Being Relaxed Being Shattered →