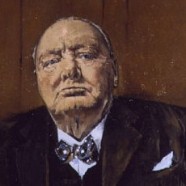 My husband and I have been watching “The Crown” on Netflix. It’s well-done, well-acted, and since my husband and I both love history, we find it very interesting. We learn something every episode. The last episode we watched was about Churchill’s 80th birthday present—a portrait of himself, commissioned by members of the House of Commons and House of Lords. The painter’s name was Graham Sutherland.

All while Churchill is sitting for the portrait, he is worried how Sutherland would portray him. He reminds the artist that it didn’t have to be a “perfect” rendition of himself and that it should be respectful of the office Churchill held. I think he is worried about his wrinkles.

When Churchill saw the finished portrait, he hated it. He complained to Lord Moran that it made him “look like a down-and-out drunk who has been picked out of the gutter….” But since the formal presentation was only days away, Churchill was convinced to proceed to avoid offending anyone.  At the unveiling before the two Houses, Churchill archly describes the painting as “a remarkable example of modern art,” to the laughter of his audience. He didn’t like modern art.

He later confronted Sutherland alone and admonished him for making him look “half-witted” and undignified. A few months later, Lady Churchill had the portrait taken away in the middle of the night and burned. Sutherland called it “an act of vandalism.” Lady Churchill, who strove to carefully control her husband’s reputation, saw the painting as “not being the kind of heroic, warrior stateman kind of image,” that she wanted to protect.

I suppose sometimes we can be put off by the image we see in the mirror (or portrait). I put on make-up to hide my wrinkles. I look at pictures of my younger self and realize how my body has changed due to pregnancies and aging. I have scars from surgeries and mishaps. My eyes don’t work like they used to. My memory feels like it’s shot.

But each of these things is also a blessing. Wrinkles show I laughed and smiled and lived. My pregnancies produced two beautiful boys. My aging means I’m still alive. Scars show I survived ordeals that have (hopefully) made me stronger. With my eyes, I’ve seen and will continue to see so much beauty around me. And my memory? Well, I’ll choose to be grateful for the mind I have left, and some things are best forgotten.

Hunter S. Thompson said, “Life should not be a journey to the grave with the intention of arriving safely in a pretty and well-preserved body, but rather to skid in broadside in a cloud of smoke, thoroughly used up, totally worn out, and loudly proclaiming ‘Wow! What a Ride!’”

Now, I know Thompson was not a model for how to live, but it doesn’t mean his words don’t have some truth to them. Try not to lament what’s wrong or weak for it represents the life that’s been lived. Celebrate all that is and was. Take full advantage of all that God has given. I actually think the portrait of Churchill is quite accurate, but I think he didn’t want his wrinkles and jowls to be a part of his legacy. That’s too bad because that is who he was in the end. How he looked didn’t diminish what he did or who he was.

Being Human connection: No matter your age, each one of us is wonderfully, beautifully, amazingly imperfect. Accept it. Get over it. Live life boldly. And enjoy the ride.