Home » Being Human » A New Set of Eyes 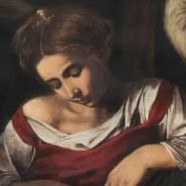 A New Set of Eyes

Posted by laurieetta on December 23, 2018 in Being Human | Leave a comment 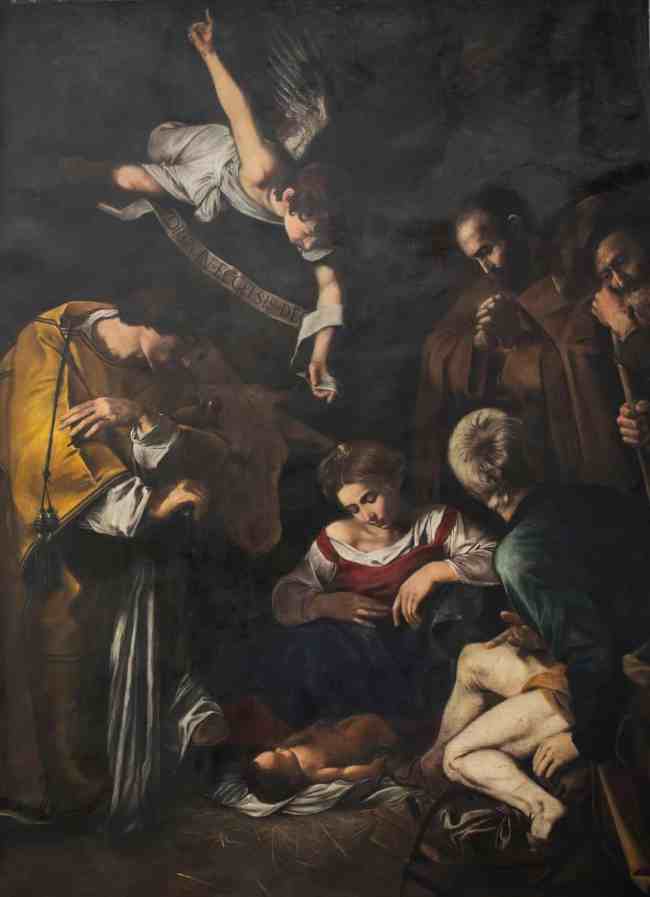 We’ve met Caravaggio before when we looked at The Denial of St. Peter (November 25, 2018). You may recall that he was quite a character, often having run-ins with the law. So, it seems appropriate that this painting of his not only caused a scandal when first released but continues to be surrounded by mystery today.

First, the scandal part. Caravaggio’s Mary is in disarray, slumping back in exhaustion as any woman would who has just given birth. But this type of realism was controversial and downright blasphemous in the 1600s. The prevailing theology of the day was that Jesus’s birth was painless and easy. It was also miraculous in that Mary delivered her baby in such a way that she remained a virgin even after giving birth.

The mystery part is that this painting was stolen in 1969 by two thieves who cut it from its frame. This inset photo shows where it used to hang. 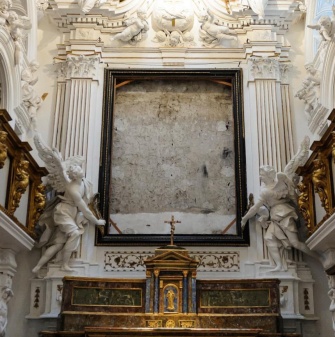 The Italian police set up a task force to find this piece of art valued at $20 million. It is widely agreed that the Sicilian mafia (the Cosa Nostra) were the culprits. They reportedly displayed it at important mafia gatherings. Years after its theft, some former members of the mafia claimed it had been cut into pieces and sold discreetly. Some claimed it has been stashed in a barn where it was “ruined, eaten by rats and hogs and burned.”

No one really knows the truth. Currently, a reproduction hangs where the original used to and the mystery surrounding it makes it a popular tourist attraction. Which reminds me of the saying, “You never really know what you’ve got till it’s gone.”

Did you know the “Mona Lisa” was stolen from the Louvre in 1911? Before it was taken, it was not widely known outside the art world. Historian, James Zug, said it wasn’t “even the most famous painting in the gallery, let alone in the Louvre.” Yet, during the two years it was gone, more people went to stare at the blank space in the museum where it used to hang than had gone to look at the masterpiece in the previous 12 years it had hung there.

Isn’t that interesting? We sometimes get a new set of eyes when something we tend to overlook is gone. Perhaps things that we thought were not of much value are worth more than we realize. I think of all the people this last year who have lost their homes and livelihoods through floods, fires, and other catastrophes. I’m sure they see things differently now; value things differently now. I bet they long for the return of a “normal day,” which was written about by Mary Jean Iron:

Normal day, let me be aware
of the treasure that you are.
let me learn from you, love you,
bless you before we depart.
Let me not pass you by in quest
of some rare and perfect tomorrow.
let me hold you while I may,
for it may not be always so. One day
I shall dig my nails into the earth,
or bury my face in the pillow,
or stretch myself tart,
or raise my hands
to the sky and want, more
than all the world, your return.

Being Human connection: May we never take for granted all we have before us now, especially this time of year.

Inset image: Oratory of San Lorenzo in Palermo, Italy where the Nativity originally hung but was cut out with a knife.

← Wonderfully Imperfect Handwriting on the Wall →