Posted by laurieetta on March 1, 2019 in Being Human | Leave a comment

Who knew that in Butte, Mont. (my home state), there is an Orthodox church where four Serbian painters, who claim not to be artists, brought scriptures to life by painting the ceiling of their worship space with amazingly beautiful artwork? As if painted on a giant imaginary wheel, we see a visual representation of stories, saints and scripture. The style of painting was in the tradition of 14th-century painters and the artists often taped copies of religious images alongside their work for inspiration. A mesmerizing blue background ties the frescoes together and represents eternity and the meshing of heaven and earth. The two-year project was finished in 2005 and the church is the only one in Montana adorned with frescos in the Byzantine style of Europe’s oldest and grandest Orthodox churches. 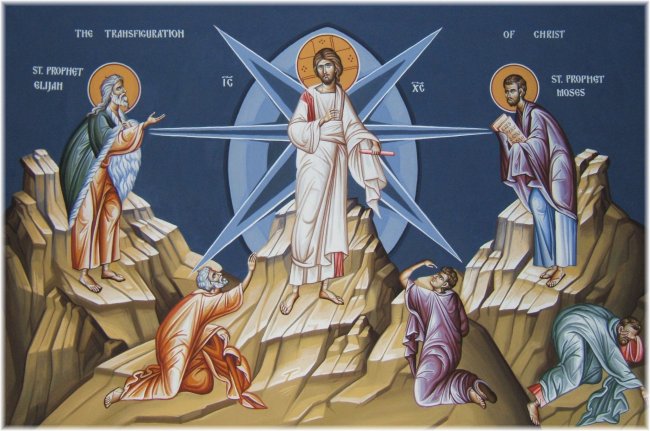 This fresco in the church represents the transfiguration of Christ (Luke 9:28-36). The story starts out innocently enough. Jesus takes Peter, John and James on a stroll up the mountain to pray. But then company comes along and Jesus, filled with glory and light, is joined by Moses and Elijah. What a sight that must have been! Moses representing the law; Elijah representing the prophets; and Jesus, representing the fulfillment of both.

And I just love how Peter reacts. He can go from saying something quite profound one minute to saying something so naïve the next. His first inclination after seeing Moses, Elijah and Jesus is to build three tents. He launches into a monologue: “Lord, it is good for us to be here… blah, blah, blah.” I don’t mean to be disrespectful, because as I said, I love Peter. He reminds me of me.

I often have launched into let’s-do-something-about-this mode when the more appropriate response would be to just take in the moment. Peter wanted to act when it was a time of beholding and worship. The text says that while Peter was talking, God spoke. Perhaps God (maybe even with a godly eye-roll?), had to interrupt Peter in order to get a word in edgewise.

Being Human connection: The world’s adage is “Don’t just stand there. Do something.” In some instances, I think God asks us: “Don’t just do something. Stand there.” Be still. Listen. Praise. Then act.

← Hope I Would Gather Thee →