Home » Being Human » The Modern-Day Prodigal 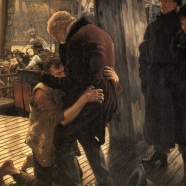 Posted by laurieetta on March 25, 2019 in Being Human | Leave a comment

This Sunday’s text is a familiar one—the story of the Prodigal Son. The youngest son takes his inheritance early, squanders it on questionable living and then returns home, relieved to be forgiven and welcomed by his father. The father throws a banquet for the prodigal son. The older brother is a little miffed at this and questions why he has never been rewarded for his loyalty and hard work.

James Tissot, a French painter in the late 1800s, painted a series of paintings on this story called, “The Prodigal Son in Modern Times.” It consists of four paintings set in contemporary English life. I would like to examine each of them to see what develops when we put a familiar story in a different setting. 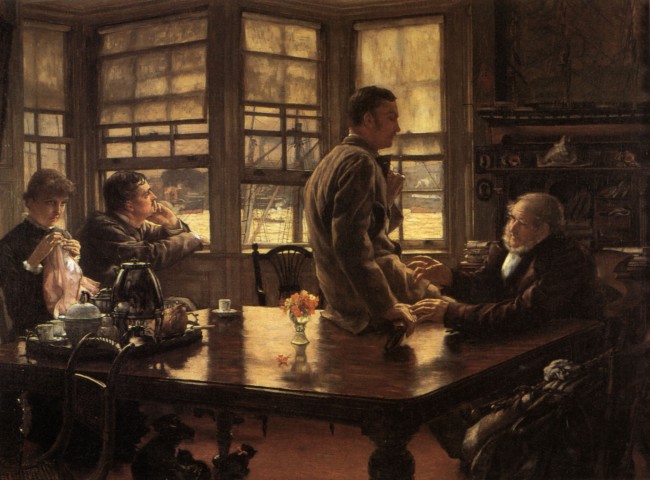 This first one is entitled, “The Departure.” The father is obviously a sea merchant and his shelves are crammed with accounting books, ships, and seashells. Outside the open window is the Thames river, crowded with boats on their way to somewhere else. The older brother, with his wife by his side, peers out the window, looking longingly into the distance. But the younger brother is ready to go. Notice his packed bag on the chair. All he needs is his share of inheritance from a reluctant father. Perhaps the father is punctuating his words of warning with his hand gestures. But the younger brother pays him no mind, looking down on his father as he clutches the money in his right hand. 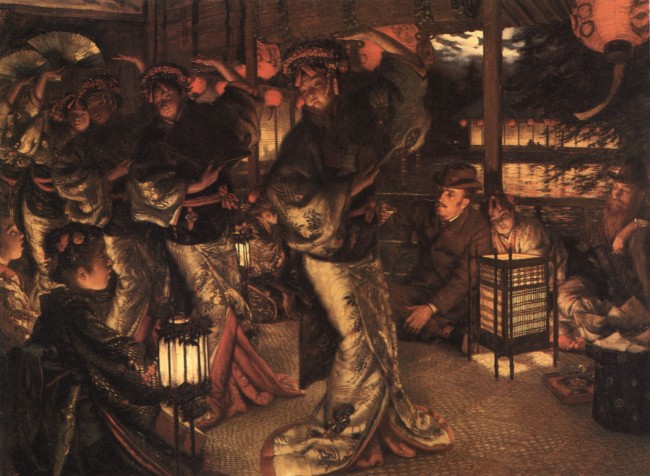 The second painting is entitled, “In Foreign Climes.” Now we see the son in a decadent setting, sitting on a floormat surrounded by dancing geishas and exotic lamps. This is a far cry from the life he left behind. He lifts his glass of drink, almost as if he is toasting the bohemian atmosphere. On his slouched shoulder leans a woman. He doesn’t really look like he is having a good time. Perhaps the worldly pleasures he hoped he would find have fallen short of his expectations. 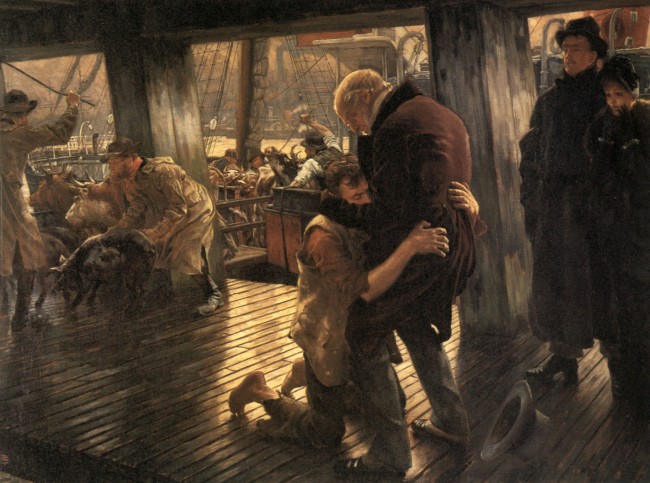 Next, we have, “The Return.” It is a dramatic scene with the younger son in tattered clothes. We see the boat he has returned on was carrying pigs and cattle. The stench was probably potent. The father’s love is sensed in his rounded shoulders, reaching down towards his son. He is relieved to hold his boy again, letting his hat fall to the deck with no regard. The older son isn’t moved at all by what he sees and looks down on the scene, disgusted and stoic. His wife puts her hands to her face in shock. 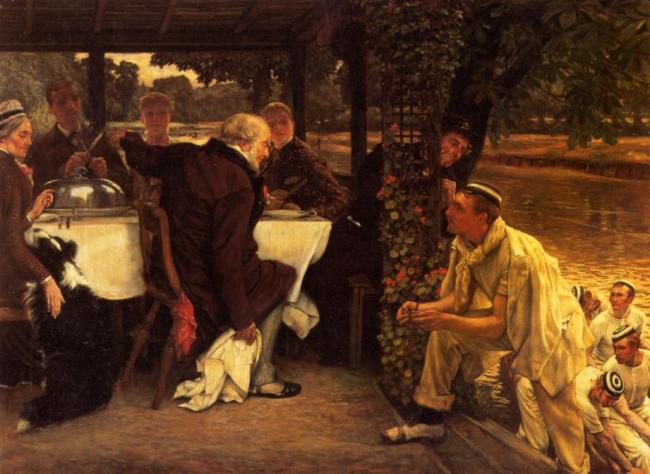 We end with “The Fatted Calf.” The older brother, dressed in boating linens, has stepped out of the scull for a smoke. His friend behind the flowered pillar whispers in his ear, informing him of the feast that is about to take place. The younger son sits at the head of the table and sharpens the knives that will soon carve the fatted calf. The father looks intently into the older son’s eyes and gestures. At first glance, it looks like it could be an invitation to join them, but then we notice that there is no room at the table. Instead, it looks like the father is pointing at the younger son, perhaps to remind the older one of the reason they celebrate: “This brother of yours was dead and has come to life; he was lost and has been found.” Why the older son wasn’t invited is a mystery. What do you think?

Being Human connection: I’ll leave any comments to the paintings themselves. Each one is wrought with tension and the collision of two worlds. The modern viewer might be pleased, encouraged or outraged by the tale, depending on his or her position in life. But when familiar stories break into other contexts, we are challenged to see things in new ways.

Featured images: James Tissot, 1882, “The Prodigal Son in Modern Life: The Departure; In Foreign Climes; The Return; The Fatted Calf.”