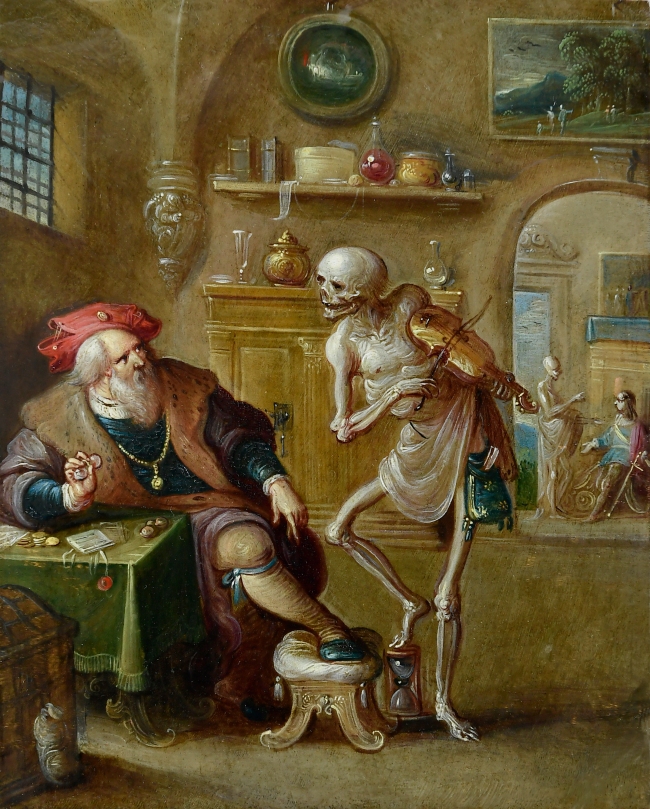 The painting we are looking at is tiny, barely 6 by 5 inches. I can’t imagine painting such details so small. But sometimes big messages come in small packages.  In Luke 12:13-21, Jesus tells the story about the rich farmer who had so much stuff, he had to build bigger barns. He was pretty pleased with himself until fate pulled the rug out from under him and not even all his careful planning or possessions could save him.

I love this illustration. We see a rich, successful man clad in expensive fur, sitting by his velvet-top table, counting his treasure. But Death has come a-calling. Death plays the violin as he leans on a large hourglass. Time is ticking away, and the last song is being played. Notice that the rich man isn’t depicted as being particularly wicked or evil—only as one who has fallen into a common trap we all struggle with: greed and the preoccupation with self. He is human, after all, and the only guarantee we all have is that one day, we will leave this early life, and we all know there are no U-Hauls pulled behind hearses.

Age doesn’t seem to matter. See the young man in the back trying to negotiate with Death as well. It doesn’t appear as if either man is getting anywhere in convincing Death to leave them be.

In this parable, Jesus invites us to focus on what is of lasting importance, and not be distracted by the riches or wealth that lulls us into a false sense of security. Jesus is pretty clear—our lives are not made secure by what we own. And since we can’t take our riches with us, the question we are invited to ask is this: in what ways are we rich towards God instead of focusing on our interests alone?

Being human connection: A little further along in Luke, Jesus tells us that where our treasure is, there our hearts will be also (Luke 12:34). Jesus is always after our hearts, isn’t he? Probably because we have won his heart, and he wants us to know that.

“Then he [Jesus] said to them, ‘Watch, and be on your guard against greed of any kind, for a man’s life is not made secure by what he owns, even when he has more than he needs.’” -Luke 12:14

About the artist: Frans Francken the Younger was a Flemish painter and the best-known member of the large family of artists. He was most renowned for his small, finely crafted cabinet pictures. Francken introduced a new subject matter to Flemish art, often with a moralizing message. His luxurious imaginary influenced painters such as Jan Brueghel the Elder and Peter Paul Rubens. His “monkeys’ kitchens,” allegorical scenes of monkeys enacting human vices, remained popular into the next generation of Flemish painters (from Wikipedia and the Getty Museum).