Home » Being Human » I will not abandon you 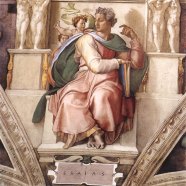 I will not abandon you

Posted by laurieetta on January 21, 2020 in Being Human | Leave a comment 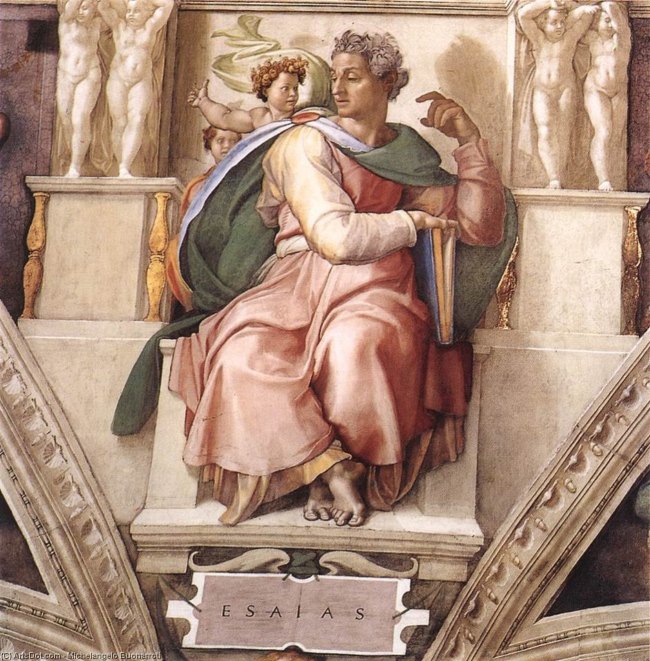 This past summer when I visited Rome, I could hardly contain myself as I looked up at the Sistine Chapel, gazing wide-eyed at Michelangelo’s masterpiece. I had just finished a book called, “Michelangelo and the Pope’s Ceiling,” by Ross King which explored the artist and what was happening to him, his peers and the country during his undertaking of this tremendous feat. I highly recommend reading it if you are a fan of art and/or history.

This particular Sistine Chapel panel depicts the prophet Isaiah. He looks as if he may have been meditating on his now-closed book before he was interrupted by the cherub. As he turns, his left hand hovers, now free of his head which had apparently been propped upon it. His attention turns to the little one, who points toward the panel depicting the Fall of Man, and the locks of gray hair rise on the prophet’s head.

I love the suspense and movement captured in this moment of time. I also love the book of Isaiah. It is full of judgment, but it is also a book of hope. The following scripture is a good example (Isaiah 49:13-16).

13Shout for joy, you heavens;
rejoice, you earth;
burst into song, you mountains!
For the Lord comforts his people
and will have compassion on his afflicted ones.

15 “Can a mother forget the baby at her breast
and have no compassion on the child she has borne?
Though she may forget,
I will not forget you!
16a See, I have engraved you on the palms of my hands.

Verse 13, and what comes before it, wax eloquently about God’s goodness and gives us a wonderful vision of a new heaven and a new earth. However, verse 14 interrupts this beautiful discourse with a painful statement: “The Lord has forsaken me, the Lord has forgotten me.”

Quite a startling accusation considering all of the promises that have just been made. But isn’t that how we are? Future salvation is fine and dandy; but we want to know: “God, what are you doing for me NOW? I feel abandoned now. I feel surrounded by needs now. I feel tragedies now. You say you love me, but what have you done for me lately?”

It interesting that there is no indication that the people of God don’t believe all the promises God has just laid out before them, but belief doesn’t always equate experience. Author Richard Lovelace said, “It is an item of faith that we are children of God, but there is plenty of experience in us against that.”

In other words, we may believe what God says, but there are all kinds of evidence to counter that belief. There’s evidence inside of us. We wonder how God can love us considering how we feel, how we are, or what we’ve done. There’s also evidence outside of us: unanswered prayer, disappointments, unfulfilled dreams, suffering. Yes, we believe with our heads, but sometimes it is hard to believe in our hearts. Sometimes it is easy to conclude that we have been abandoned by God.

So, when we accuse the Lord of forgetting or forsaking us, what is his answer? “Can a nursing mother forget her baby or show no compassion for her child?” (verse 15)

God doesn’t ignore our accusation of abandonment or gloss over it, or get angry, or tell us to buck up. Instead, he gives us a metaphor to help us understand. Nothing can be more intimate than a nursing baby and his or her mother. Even if it feels like he has, God will never forget us, never abandon us.

Being Human connection: He has written us on the palms of his hand, the same place the scars on Jesus reside. Second Timothy 2:13 says, “…even if we are faithless, [God] remains faithful, for he cannot disown himself.” What an amazing promise!

← Bending in Love A Slow Fade →