Home » Being Human » Everyone’s a Critic

Posted by laurieetta on August 28, 2020 in Being Human | Leave a comment 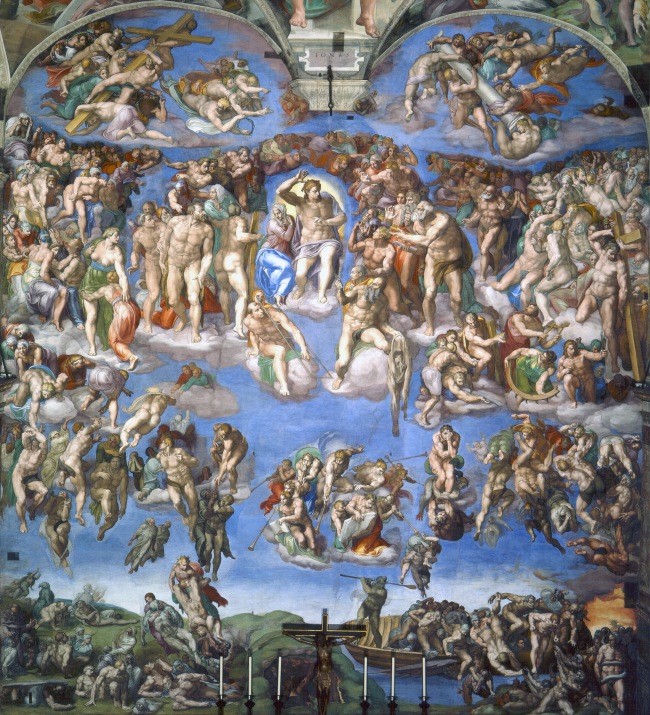 When I was in Rome last summer, I had the distinct pleasure of taking in Michelangelo’s artwork in the Sistine Chapel. Most people know about the famous ceiling, but this work is just as impressive. It is the altar wall of the Sistine Chapel and depicts the Second Coming of Christ and final judgment by God. Michelangelo started working on it 25 years after completing the ceiling and it took him over four years to complete.

In the lower part of the fresco, Michelangelo followed tradition in showing the saved ascending at the left and the damned descending at the right. Christ is the central figure, surrounded by prominent saints. The Virgin Mary is under his raised arm and Christ is looking over the damned as she looks over the saved. Over 300 figures make up the painting and originally, Michelangelo painted most of them nude. This did not go over very well and controversy soon ensued. Eventually, most of the nudity was covered by painting drapery over the offending body parts.

One of the loudest critics was a man named Biagio da Cesena, the pope’s Master of Ceremonies. Regarding the work, he said, “It was most disgraceful that in so sacred a place there should have been depicted all those nude figures, exposing themselves so shamefully, and that it was no work for a papal chapel but rather for the public baths and taverns.” 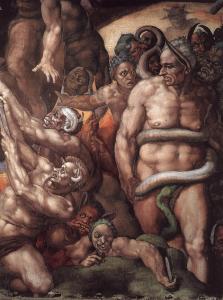 Upon hearing this, Michelangelo painted Cesena’s face on Minos, judge of the underworld [see inset], and covered up his nakedness with a coiled snake. When Cesena complained to the Pope, the pontiff joked that his jurisdiction did not extend to hell. I guess you do not want to make an enemy of Michelangelo.

One of the scary things about the end times is Judgement Day. The damned figures in the lower right-hand corner of this painting look scared and miserable! Such images can strike fear in our hearts.

The truth is, we do not need to fear judgment day if we have aligned ourselves with God’s son. And how do we do that? Jesus said, “Love one another just as I have loved you. That is how people are going to know that you are aligned with me” (John 13:34). Do all things for the sake of love and you will align yourself with Christ.

1 John says, “God is love. When we take up permanent residence in a life of love, we live in God and God lives in us. This way, love has the run of the house, becomes at home and matures in us, so that we’re free of worry on Judgment Day—our standing in the world is identical with Christ’s. There is no room in love for fear. Perfect love casts out fear (1 John 4:17, The Message).

Being Human Connection: Love and be loved, beloved!