Home » Being Human » What a Testimony 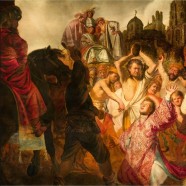 Posted by laurieetta on January 29, 2021 in Being Human | Leave a comment

In Acts 7, we find the story of the church’s first martyr, Saint Stephen. He had confronted the religious elite of the day, calling them a stiff-necked people who resisted the Holy Spirit. They didn’t care for this much and ordered him stoned to death. This scene has been painted by many of the Masters. This particular one is the first painting done by a 19-year-old named Rembrandt.

As the stones strike Stephen, he is filled with the Holy Spirit and “looked up to heaven and saw the glory of God, and Jesus standing at the right hand of God.” The shaft of heavenly light illuminates Stephen’s face and spills on to the mob who surrounds him. At the rear, looking down on the scene, is Saul, a persecutor of the Christian church. Notice the coats of the stoners laying across Saul’s lap. But also notice that the same face that is on Stephen is also on Saul. They are even looking in the same direction. Why would Rembrandt do that? What kind of statement was he making?

Another face in the crowd has significance. Rembrandt painted himself in the crowd, peering around the man with a rock raised above his head. Rembrandt was famous for self-portraits in his artwork.  It is estimated that he depicted himself in approximately fifty paintings, thirty-two etchings, and seven drawings. Why would he paint himself in and among the gang of killers? By the look on his face, he seems to be having second thoughts. Had he misjudged this man?

Just before Stephen dies, he says, “Lord, please do not hold this sin against them.” A powerful statement given the circumstances. Could the grace Stephen offered his killers have an impact on Saul? A couple of chapters later, we read about the conversion of Saul, better known after that as the Apostle Paul—one of the most important figures in Christianity.

Being Human connection: What can we learn from Stephen’s last words: “Lord, please do not hold this sin against them”? My last words would probably be more like, “Lord, make sure they get what they deserve!” But what if we had the courage to offer grace instead of condemnation? Would people watching, like Rembrandt, take notice. I bet they would. What a testimony that would be.

← Days of Summer In the Bleak Midwinter →