Home » Being Human » Who will show her mercy? 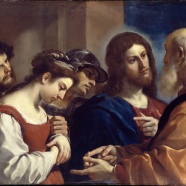 Who will show her mercy?

Posted by laurieetta on March 21, 2021 in Being Human | Leave a comment

This painting by Giovanni Francesco Barbieri offers us a gorgeous depiction of the story of the woman caught in adultery. The woman is saved from being stoned to death by Jesus’ words, “Let anyone among you who is without sin be the first to throw a stone at her” (John 8:7). Shame, accusation, mercy, judgment are all represented here. The closeness of the viewer to the characters in the scene makes us feel claustrophobic and invites us into the tension of the moment.

Because of a childhood accident that left Barbieri with a bum eye, he became known as Guercino, which means “squint-eyed.” He was self-taught and became the leading painter in Bologna in his time. He used chiaroscuro effectively (the contrasting light and shadow) and was known for his bold, fluid brushwork. He resisted painting the idealized scenes that most artists of his day preferred and instead depicted fleeting and unposed moments.

As a master storyteller, Barbieri freezes a pivotal moment in this story. Jesus’ expressive glance that locks in on the eyes of the accuser says volumes. But it is the hands that truly tell the story. A soldier’s tight fist contrasts the woman’s submissive soft hands. The confused jumble of the Pharisee’s fingers contrasts the simple direct gesture of Christ’s pointing finger.

As we are pulled into the scene, we may ask ourselves which character we relate to. Sometimes we are the accusers—quick to make a judgment or point a finger. Sometimes we are a member of the crowd—ashamed of our own failings when they are made known. Or perhaps we feel like the woman, scared, alone, and in need of mercy.

And then there is our Savior, the only one whose record is blameless. As it turns out, the only one who could throw a stone is unwilling to condemn her. Instead, he shows her mercy. Later, in Jerusalem, the Pharisees will again accuse without a fair trial. Jesus will be the victim and unlike the woman, he will not be shown mercy.