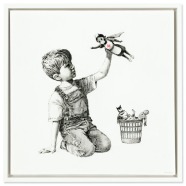 Posted by laurieetta on March 26, 2021 in Being Human | Leave a comment

Banksy is an English-based street artist who uses creative, unconventional, and satirical images to make political and social commentary. You never know when or where one of his works is going show up, but when it does, it creates quite a stir and is instantly famous.

This particular work of his made headlines. On March 23, it sold at auction for 16.8 million pounds, which is over 22 million American dollars. The drawing is a tribute to the caregivers fighting Covid-19. Batman and Spider-Man, usually the favorite superheroes, sit idle in a basket while the little boy turns his attention to a doll representing the frontline heroes who risk their lives to save others. The title of the work is Game Changer and all profits from its record-breaking sale were donated to the National Health Service of Britain.

Merriam-Webster defines “game changer” as “a newly introduced element or factor that changes an existing situation or activity in a significant way.” It got me to thinking about what game changers I’ve experienced. My cell phone is one that comes to mind. It went on the blink this week and I did not realize how much my life would be affected by its absence. What are the game changers in your life?

This Sunday is Palm Sunday—the day Jesus rides triumphantly into Jerusalem. What happens to Jesus by the end of the week is the most significant game changer of all. Jesus was not a prophet that pointed to the Savior, he was the Savior that the prophets pointed to. His life, death, and resurrection weren’t just events in history, they are history.

Being Human Connection: Jesus’ life was perfect and his death was brutal, but in the end—the tomb was empty. Game changer.

“The greatest note of triumph ever sounded in the ears of a startled
universe was that sounded on the Cross of Christ— ‘It is finished!'”

← Who will show her mercy? Weed-Wacker for the Soul →