Home » Being Human » Weaving and Unweavng 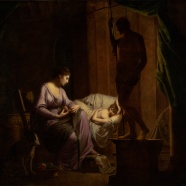 Posted by laurieetta on August 24, 2021 in Being Human | Leave a comment

The title of this painting, Penelope Unraveling Her Web, suggests there might be a story here and indeed there is. In Homer’s epic poem, Odyssey, we learn Penelope’s husband has been called away to fight the Trojan War. In his 20-year absence, Penelope is beset by suitors who tell her that her husband has perished in a shipwreck. She wishes to remain faithful to him so to satisfy her suiter’s requests, she promises to marry one of them after she has completed weaving a shroud for her father-in-law. But this will never happen because Penelope unravels the weaving at the end of each day, only to begin weaving again in the morning. A potter named Josiah Wedgewood commissioned this painting from the artist, Joseph Wright of Derby, as a tribute to female loyalty and cleverness. A dog in a painting was often a symbol of loyalty.

Wright was from Derby, England, and used dramatic contrasts of light and shade to set the mood. This scene shows Penelope late in the evening, rewinding her unraveled thread into a ball. A statue of her husband, Odysseus, is in the forefront shadows, invoking the feeling that his presence permeates the room, always looking on. Their son, Telemachus, is bathed in moonlight as he sleeps. Penelope looks longingly at him with melancholy in her eyes. Weaving and unweaving. How much longer?

One picture of God’s working in our lives is that of a tapestry being woven. We only see the tangled and frayed threads underneath the weaving but if we were to look at the other side, we would see how God is creating something beautiful.

Each of our tapestries are unique to us. Certain threads of our story come to an end—a loved one passes; a relationship dissolves; a dream dies. Other threads take a dramatic turn—we embark on a new career or season of life. At times, regret sneaks in and we wish we could be like Penelope and unravel what has been woven. Or maybe we feel as if we are stuck in a rut, the same story every day.

Could it be, between us and God, there is always weaving, unweaving, and reweaving? Every day we have a choice as to what threads we will pull through and what threads we’ll let drop. Perhaps weaving and unweaving are necessary for us to grow and expand. God willing, we unweave the lies we’ve allowed to creep into our tapestries and reweave with the thread of Truth found in God’s word.

Being Human connection: This reminds me of a poem by Corrie Ten Boom, author of The Hiding Place:

My Life is but a weaving
between my Lord and me;
I cannot choose the colors
He worketh steadily.

Oft times he weaveth sorrow
And I, in foolish pride,
Forget he sees the upper,
And I the under side.

Not til the loom is silent
And the shuttles cease to fly,
Shall God unroll the canvas
And explain the reason why.

The dark threads are as needful
In the Weaver’s skillful hand,
As the threads of gold and silver
In the pattern he has planned.

He knows, he loves, he cares,
Nothing this truth can dim.
He gives his very best to those
Who leave the choice with him.

I want you woven into a tapestry of love, in touch with everything there is to know of God. –Col. 2:2 (The Message)

For it was you who formed my inward parts; you knit me together in my mother’s womb. –Psalm 139:13