Home » Being Human » The Bookworm 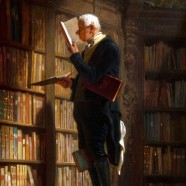 Posted by laurieetta on September 10, 2021 in Being Human | Leave a comment

Carl Spitzweg titled this painting The Librarian, but the viewing public renamed it The Bookworm. In the late 1800s, when this painting was made, calling someone a bookworm was an insult, implying one was book-smart but not living in the real world. He is so into learning that the books almost become an extension of his physical existence—one in his right hand, another under his left arm, a third on between his knees, and the fourth being nearsightedly read in his left hand. His kerchief is hastily stuffed into a pocket and he stands precariously atop a ladder. His search for knowledge seems to trump his sense of safety.

The title above the library section he is in is labeled “Metaphysics,” which is defined as abstract theory with no basis in reality. This, along with the ray of light falling through the window, adds to the idea that this painting is making fun of enlightenment. (Spitzweg was known to be a bit of a humorist.) His wide eyes hint of confusion rather than comprehension. It has been said that the shadowed globe in the foreground indicates a lack of interest in the outside world by the bookly scholar. One art critic says, “The librarian may think he has achieved great heights but really he has climbed only a few steps on a library ladder.”

Knowledge is an admirable and desirable, but we can’t let it stand in the way of getting out there and living life and—more importantly—connecting with people. This reminds me of a story from Henri Nouwen’s book, The Wounded Healer.

“One day a young fugitive, trying to hide himself from the enemy, entered a small village. The people were kind to him and offered him a place to stay. But when the soldiers who sought the fugitive asked where he was hiding, everyone became very fearful. The soldiers threatened to burn the village and kill every man in it unless the young man was handed over to them before dawn.

“The people went to the minister and asked him what to do. The minister, torn between handing over the boy to the enemy and having his people killed, withdrew to his room and read—hoping to find an answer before dawn. After many hours, in the early morning his eyes fell on these words: ‘It is better that one man dies than that the whole people be lost.’

“The minister closed the Bible, called the soldiers and told them where the boy was hidden. And after the soldiers led the fugitive away to be killed, there was a feast in the village because the minister saved the lives of the people. But the minister did not celebrate. Overcome with deep sadness, he remained in his room.

“That night an angel came to him, and asked, ‘What have you done?’ He said, ‘I handed over the fugitive to the enemy.’ Then the angel said, ‘But don’t you know that you have handed over the messiah?’ ‘How could I know?’ the minister replied anxiously. Then the angel said, ‘If instead of reading your books, you had visited the man just once and looked into his eyes, you would have known.’”

Being Human connection: Reading the Bible is key. Theological reflections and spiritual books are important, but we can’t stop there. God invites us into relationships, not religion.