Home » Being Human » The Bread of Life 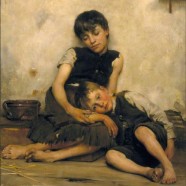 The Bread of Life

Posted by laurieetta on December 21, 2021 in Being Human | Leave a comment

Let me begin with a true story from WWII. While Europe was being freed from Nazi occupation at the end of the war, there was terrible shortage of food and much hunger in the land. As you can imagine, there were many orphans who suffered the worst of it. The allied forces rounded up the starving orphans and put them in camps where they were fed and cared for. Even though they were lovingly looked after, the orphans hardly slept at night. Psychologists were brought to the camps to help with the situation and concluded the orphans were not sleeping because they were anxious. They feared waking again with no food. The allied forces running the camps came up with an idea. They gave the children a piece of bread to sleep with at night and told them the bread was just to be held, not eaten. The results were amazing. All the kids slept well from then on. The guarantee they would wake up to food calmed their fears, gave them hope, and allowed them to trust they were now in good hands.

Being Human connection: Jesus is the bread of life—a bread that offers hope, that calms fears, and that invites us to trust that we are in good hands as well. Wrap your arms around that comforting promise and “sleep in heavenly peace.”

The artist who painted this beautiful yet haunting scene of two children in need is Thomas Kennington. He was well-known for his compelling pictures of the urban poor in London. This picture is titled Orphans and depicts the harsh realities of life on the street. Oftentimes, those in need aren’t as visible as this. We may never know a coworker’s living conditions or a neighbor’s struggle to put food on the table. As we move through the Christmas season, may we be reminded to pray and provide for those in need.